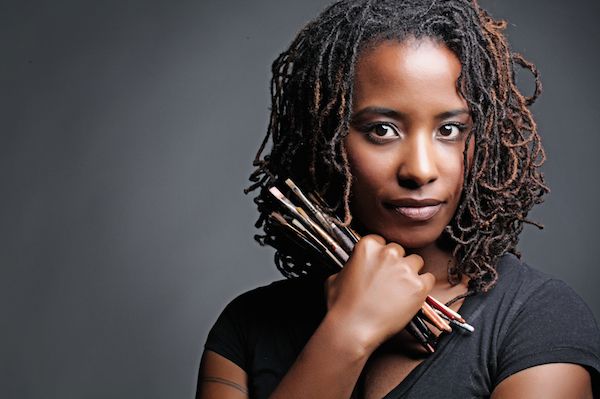 The blend of a Pisces Sun and Virgo Moon consists of the individuals core life energy being directed toward  working with the invisible and intangible elements of life.

The sun’s placement suggests that the person is stimulated by an orientation to their inner world which consists of all things symbolic. Music, art,myths, dreams, films, etc.. pervade the consciousness in hopes that they may be expressed through some creative and artistic form.

The Virgo Moon uses the Pisces sun’s light to reflect a personality which needs to give practical manifestation to these ethereal concepts. There’s an emotional requirement to be exacting, proper and correct about how these particular energies are applied into the world.

This blend symbolizes the no- nonsense metaphysician who is able, through using the Virgoan skills of analysis and discrimination, to make otherwise nebulous concepts, pragmatic and workable in the real world.

“Who in their right mind can mimic a style like mine? I design rhyme and get mine all the time.” – KRS-ONE,  Sun in Leo

As the sun leaves Cancer and makes its entrance into Leo, the crabs have peacefully retreated back into their shells as quietly as they emerged. The Cancers, with their graceful sideways motion have exited the picture with little to no fanfare.

Did someone say fanfare?

That’s right! Emerging brightly, like the Sun that rules their sign, Leo is in the building! The lion and the lioness. The king and the queen. Fortunately, I’ve rented the mega stage for the next month, because we’ll probably need every inch of it, and deservedly so.

Have you ever just gone outside and tried to look RIGHT into the sun during mid-day? Yes, the light is overwhelming. The solar force provides a tremendous amount of warmth and stimulates growth in all living things. Every day, the Sun rises to the occasion to bless the world with it’s illumination. At another time, it sets. As to not expend all of it’s massive strength at once.

Leo: you have a strong calling. Not only to use your personal power and creativity to shine, but also to ignite others with the rays of confidence that you so effortlessly emit.

What does the lion and the lioness’ curriculum consist of?

What type of journey do they need to embark on to begin the process of mastering Leo?

Those born with the Sun in Leo need to engage in experiences which will allow them to discover their unique identity and also, to use their talents.

Leo’s must come to the realization that there’s no one in this world exactly like them. They must strive to create their own personal style by placing a creative stamp on their work, whatever that work may be.

Whether it’s film, music, language art or business, a significant portion of Leo’s lifetime curriculum consists of claiming their kingdom or queendom. Finding their special portion of the world in which they can rule.

In regard to this special place, it doesn’t really matter if the outside world is in tune to it or not.
You may not have an album out, but you have one-hundred 60 minute TDK cassette tapes in a box in your bedroom with recorded beats and rhymes. That’s YOUR territory. No book, but journals full of dramatic, expressive, heart moving poetry? Once again: a Leo’s private domain.

Leo’s must also be aware of, and even seek out people and situations which will test their self-confidence, provide them with exposure and allow them to perform. I’m talking about free, unfettered self-expression. The shells are for Cancer’s, but the stage is for the LION.

Just as the sun emerges from behind the clouds, you must eliminate any self-limiting relationships, attitudes or complexes which will diminish your shine or drain you of your light which is your birthright. Learn how to risk.

What’s in Leo’s toolbox? What types of instruments do the lion and lioness have at their disposal?

This star quality which, when cultivated can catapult you into circles which will accelerate your development by leaps and bounds. What better example do we have of this Leo flair than President Obama? His opponents kept labeling him as a “celebrity” because no one they were familiar with exuded such style and regal authority all rolled into one.

You also possess an innate sense of dignity. You know what time it is and won’t allow anyone to play you cheap. You know your worth. You’ll tell the next Man/Woman in a minute, in the words of MC Lyte:

“you ain’t got the bait that it takes to hook this.”

Your standards are fully in tact and you know who you are.

Also in your toolbox is an exorbitant amount of generosity. Not only of material resources, but also of spiritual and emotional ones. Your capacity to give and set the world on fire with your zeal is second only to your fire sign cousin Sagittarius.

You possess the ability to use your individual gifts to impact the collective on a large scale.

The Leo’s Trash Can

What behavioral waste does Leo need to eliminate? What flaws stifle personal development?

In order to fully actualize Leo’s potential, they must diminish selfish pride.

Just like the Sun’s symbolism, the low-level expression of the lion’s energy is to behave as if the earth revolves around THEM.  Carried to extremes, they can become spoiled children, subjectively expanding the parameters of their kingdom or queendom only to invade the space of others. The unsettling intrusion on a physical, psychological and emotional level.

Eliminating the need for excessive praise and validation is also high on Leo’s developmental priorities. Yes, we all want pats on the back and acknowledgement for our efforts.
However, when you start to allow external factors such as the amount and frequency of applause to override your internal valuation system, it becomes a serious issue.

We all know, like Eric B and Rakim, “moving the crowd” is one of your serious gifts in life, but when the crowd does indeed move, and the clapping stops, you must have the capacity to stand ALONE.

Leo, your destiny awaits you. It’s time to ROAR in the fashion that only YOU are capable of. Develop the knack to express your unique talents and you will be unforgettable.

In the process, arm the “cubs” with developmental tools and send them out into the world well prepared to build upon your creations.