Through research and experience, I’ve found the Nodal axis (South Node/North Node) to be one of the most interesting and telling points in the birth chart when it comes to our overall life themes and direction.

For those of you who may be new to Astrology, the nodes aren’t planets or physical bodies, but rather astronomical or mathematical points which represent points on the Moon’s orbit around the Earth.

Typically, the North Node (which looks similar to a set of headphones) is described as one’s ultimate life direction or a suggestion of new energy to be digested in order to fully actualize one’s potential. While, the South Node (which looks like the same headphones, but just upside down) suggests a point of strength, but also one of potential overindulgence or dependence, which needs to be balanced and re-oriented to serve the needs of the North Node.

When interpreting birth charts, it’s important to view the nodes as an axis. In some Astrological literature, you may read that the South Node is “bad” and needs to be avoided, while the North Node is “good” and should be pursued exclusively without thought to it’s operational base.

I like what Astrologer Kevin Burk has to say about balancing the nodal axis:

“The true process of the North Node is not about turning our back on the past. The North Node is about taking stock of the past, honoring it, working with it, building on it and learning how to use it in a new way.”

One potential meaning of having a planet or planets conjunct (this could also be applicable to other aspects) the North Node is that the planetary energies in question hold clues to how we’re able to ultimately express the combined energy of our nodal axis in a way which allows us to maintain the riches stored in the South Node and stretch and develop North Node faculties as a means of personal growth. 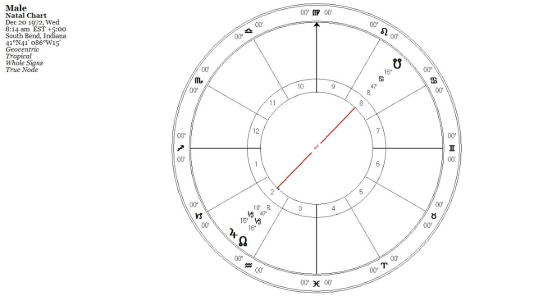 Using the chart above as an example, you can see that Jupiter is tightly conjoined to the North Node. This suggests that the “tapping into” Jupiterian energies is essential for this individual to actualize their ultimate potential.

” A planet conjunct the North Node is a piece of North Node medicine. There’s something about what this planet embodies that you need to bring into your life more.”

If you have planets making aspects to your North Node, think about the myriad of ways that you may be able to consciously include their archetypical meaning and expression into your life in order to become what you were meant to be.