Leo energy suggests an inclination toward gaining notice from others and being appreciated for being irreplaceable.
The validation of one’s identity for being  unique is a central theme.
Planets placed in Leo suggest fulfillment through finding a creative channel as to express distinctly creative gifts to the world at large. Often, the word ‘validation’ gets distorted.  A dangerously inaccurate picture of a person seeking approval from anyone they can find can be developed if we’re not careful. On some level, we all need affirmation that who we are is okay. No woman or man is an island.
To a greater or lesser degree,  we all depend on others to provide this “feedback” to us .The importance of maximizing Leo placements comes with knowing how much weight to assign to the praise or criticism of other people.
There are potentially two extremes here : denying our needs to be affirmed, cherished, recognized and appreciated altogether- or living for the limelight and the lavish praise at the exception of almost everything else. It’s important to find a balance here.Neither of these extremes are healthy in order to produce the type of self-esteem that we need to be a human being that functions at optimum level.
In his book “The Six Pillars of Self-Esteem”, Nathaniel Branden  refers to Self-Esteem as the “immune system of consciousness” and goes on to say that it’s one of the realities that we can’t avoid. WE NEED IT. We can’t be indifferent to our self-evaluation
Branden goes on to give a more elaborate definition:

Self-esteem, fully realized, is the experience that we are appropriate to life and the requirements of life. More specifically, self-esteem is:

2. Confidence in our right to be successful and happy, the feeling of being worthy, deserving, entitled to assert our needs and wants, achieve our values and enjoy the fruits of our efforts.

One of the grand themes for Leo is being able to make the make the distinction between authentic and pseudo self-esteem.

The Leo archetype is bold and fiery. It WANTS to be NOTICED. We must remove the notions from our minds that there’s  something inherently “wrong” with this.

I would say that it’s more about what you want to be noticed FOR. In this society, we somehow place more value on the sentiment of wanting to be meek and humble and wait for our rewards some distant day in the future. Thinking that the world will be kind enough to notice us. This may or may NOT happen.

The honorable Marcus Garvey,(Sun in Leo) said it so eloquently: 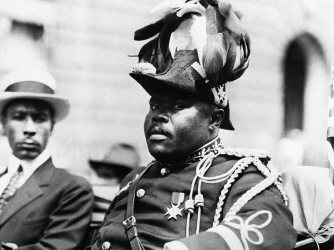 The food for thought here is that  possessing GENUINE confidence doesn’t require refusal to acknowledge the abundance that life has bestowed on us. It’s more of an inner recognition of the certainty of our ability to carve out our place in the world.

What’s our measuring stick or navigating tool for deciphering how close we are to possessing authentic self-esteem?

“But a healthy self esteem gives a man an inestimable weapon in dealing with errors: since his own value and the efficacy of his mind are not in doubt, since he does not feel that reality is his enemy, he is free to bring the full of his intellectual powers and knowledge to the task of identifying facts and dealing with problems. The foundation of his consciousness is secure, so to speak.”

“An individual who develops healthily derives intense pleasure from the work of his mind, from the achievements which that work makes possible. Feeling confident of his ability to deal with the facts of reality , he will want a challenging, effortful, creative existence. Creativeness will be his highest love, whatever his level of intelligence.

“Feeling confident in his own value, he/she will be drawn to self-esteem in others; what he will desire most in human relationships is the opportunity to feel admiration; he will want to find men/women and achievements he can respect , that will give him the pleasure which his own character and achievements can offer others.”

On the flip side, we have the counterfeit version of self-esteem:

“Pseudo self-esteem, an irrational pretense at self-value, is a non rational, self-protective device to diminish anxiety and to provide a spurious sense of security- to assuage a need for authentic self-esteem while allowing the real causes of its lack to be evaded.”

” A man’s pseudo- self esteem is maintained by two means, essentially: by evading, repressing, rationalizing and otherwise denying ideas and feelings that could affect his self-appraisal adversely; and by seeking to derive his sense of efficacy and worth from something other than rationality, some alternative value or virtue which he experiences as less demanding or more easily attainable such as “doing ones duty”, or being stoical or altruistic or financially successful or sexually attractive.”

“To the man of pseudo self-esteem, reality appears as a threat, as an enemy; he feels, in effect, that it’s reality OR his self-esteem-since his pretense at self-esteem is purchased at the price of evasion, of entrenched areas of blindness, of cognitive self-censorship.”

The choice is essentially ours on how we use any particular sign and planetary energies.

Planetary placements in Leo are ripe for examining issues within which propel us toward, or inhibit us from becoming more of our authentic selves.

Photo by Dellon Thomas from Pexels

2 thoughts on “Leo : The Developmental Lessons”